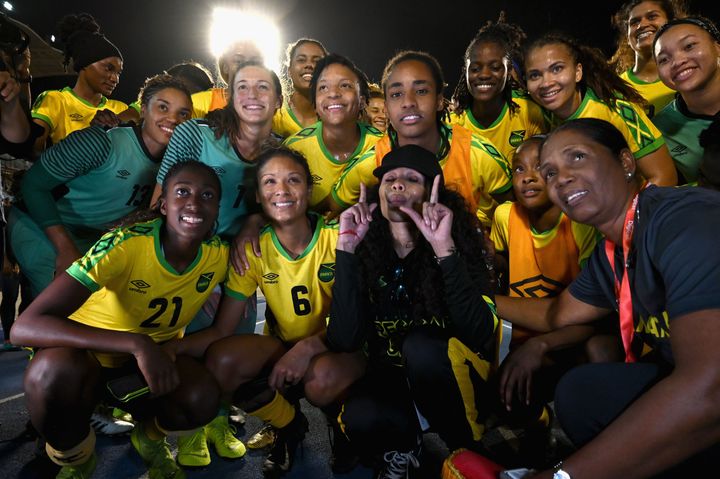 Cedella Marley stood near the stadium tunnel at Stade des Alpes as the Jamaican women’s national team walked off the field. The daughter of legendary reggae singer Bob Marley and the main benefactor of Jamaica’s women’s national soccer team, Marley had watched from afar as her Reggae Girlz limped to a 3-0 loss to Brazil in their first-ever Women’s World Cup match.

Jamaica entered the tournament as the darlings of this tournament ― a women’s team that made it to France just a decade after the Jamaica Football Federation cut funding and disbanded the team, and just five summers after FIFA stopped considering it inactive. 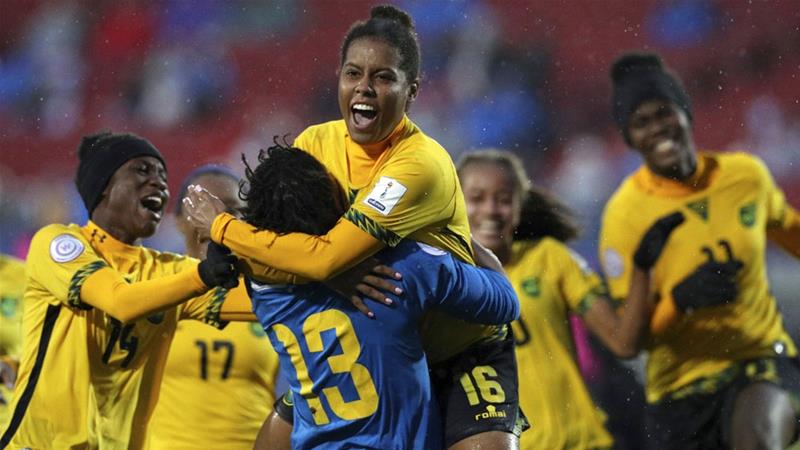 Marley is a big reason reason why: The singer and businesswoman has poured her own money into the revival of Jamaica’s women’s national team and raised hundreds of thousands of dollars more to keep it alive, all with the vision of getting it here, to France and women’s soccer’s biggest stage.

But because of a paperwork mix-up, Marley didn’t have the proper credentials to enter the field with her team, so she greeted the Reggae Girlz from the other side. And as they left, Marley waited for her chance to meet a woman who has served as one of the sport’s pioneers in her own way.

The gate swung open, and there she was: Marta, the legendary Brazilian soccer star.

Here's what Marta told the #ReggaeGirlz As our focus shifts to 🇮🇹 Italy. We pause to give thanks for our journey and the support along the way. Bless up! pic.twitter.com/nI7GBGTvbp

Marley never has. She first began helping the Reggae Girlz in 2014, six years after the Jamaican federation cut funding for the team. She didn’t quit when, two years later, the federation disbanded the team again, or during a 30-month period from 2015 to 2018 when the Reggae Girlz didn’t play a single international match.

Marley’s financial backing ― some on her own, and more through the Bob Marley Foundation ― has helped provide a base of support for the team, which has also raised money through Indiegogo campaigns and fundraising events. They have received money as well from Alessandra Lo Savio, co-founder of the Alacran Foundation, a philanthropic organization. Then, in January 2018, the nonprofit group called the Reggae Girlz Foundation launched with the mission to “improve the growth, development and access to quality football programs that enhance the physical, mental and personal development of girls in underserved communities across Jamaica.”

Those efforts have helped fill gaps, but not all of them: Head coach Hue Menzies is a volunteer. There have been transportation debacles. Coaches have made stops at Costco to buy coats for players so they didn’t freeze during games in chillier climates. Teams like the United States practice at posh facilities meant for top-notch professional athletes. Jamaica’s women have struggled to simply get together for training camp at all.

Still, it was enough to at least get here, which Jamaica did last fall by rebounding from a 6-0 drubbing at the hands of the United States to beat Panama in a nervy match that required penalty kicks to decide. It made them the first Caribbean nation ever to qualify for the Women’s World Cup.

Marley’s help has made her a star among the Reggae Girlz: After the loss to Brazil, the Jamaican women spent last week telling Marley that they needed her with them before their second game, against Italy. They wanted her to dance with them, to celebrate that they’re here. 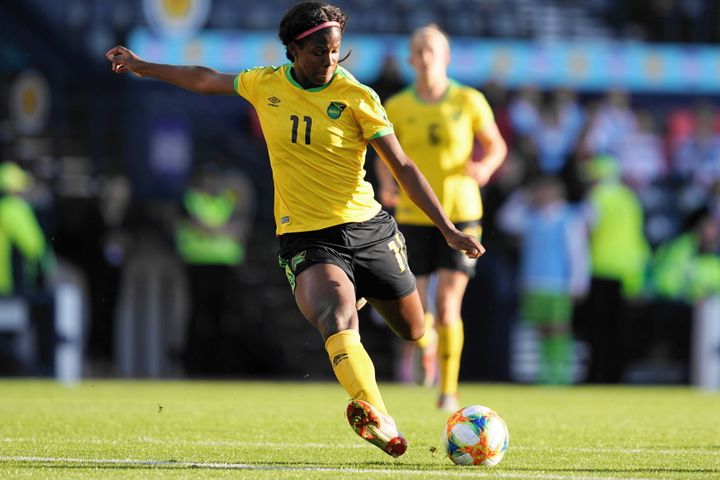 It wasn’t that long ago that few in Jamaica even knew the Reggae Girlz existed. If they did, they didn’t acknowledge the team. Marley remembers the games back in 2014, when the stadiums were empty.

“Thank God I brought my team and my family because we were the cheerleaders,” she said. “I brought a House of Marley boombox and we would play the theme song when the girls were running out to the stadium. It was hilarious the amount of stuff we did at the time. We were really having fun. And the girls were having fun, but they were taking every single task very seriously. And now we are here.”

Now, though, the fans back in Jamaica are “going crazy” over this team, she said.

The fans in France are too. When I asked Ian Simpson, who is originally from Jamaica but now lives in Ft. Lauderdale, Florida, why his family had traveled to this town in France, he responded simply, “Jamaica.” He brought his 11-year-old daughter Ayanna.

For a country whose men can count only one World Cup appearance of their own, the Reggae Girlz’ first appearance is a rare chance to celebrate Jamaican soccer outside of the Caribbean.

“The Reggae Boyz were in France in 1998. Twenty years after, and now we have the females,” said Michael Thompson, a Jamaican man who lives in Toronto now. “We are on the world stage, well-represented.”

Sitting at a nearby restaurant with friends, Dahlia Steele-Huie had her Jamaica jersey on and her nails painted with the Jamaican flag. All of them were originally from Jamaica and now live in the United States.

They had been planning this trip for over a year, because they wanted the team to know it has their full support. “We’d like to see other young girls play soccer,” Steele-Huie said. “Because when we were young, soccer was a taboo. So, we are happy to see this generation of women come out there and represent us in soccer.” That Jamaica lost to Brazil, and would lose again to Italy later that night, didn’t seem to matter. 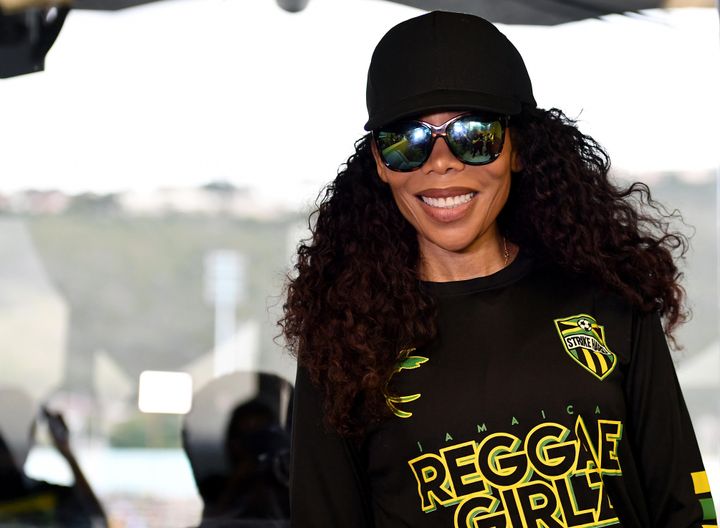 Thousands cheered despite a tough game against Italy, whose staunch defense kept Jamaica scoreless and whose offense did a number on them, scoring five goals. Jamaica’s superstar, Khadija “Bunny” Shaw drew a yellow card for a high kick that caught an Italian defender in the face. She still hasn’t scored, and after a frustrating performance, she declined to talk to the media.

The fans, though, continued to wave their flags as they walked back to their hotels in Reims, many talking about how they were traveling to Grenoble in the south of France, tucked into the Alps, for Tuesday’s final group-stage match against Australia.

Jamaica’s World Cup run will almost certainly end after that match. In Brazil, Italy and the Aussies, Jamaica drew opponents from countries that have more established women’s soccer programs, either because their federations have historically invested more or because they’ve begun to, through direct influxes of cash into the national teams or through new domestic leagues.

But still, none of those countries spend enough on the women, as Marta can attest: After the Brazilian who has scored more World Cup goals than any woman in history added to her tally against Australia last week, she celebrated by pointing to a women’s equality flag on her boot.

At the post-match press conference, Menzies noted how infrequently Jamaica plays international matches, and how little money the team receives. “At the end of the day, we have to be doing this more often, because we have the tools, we have the components, and the natural athletes to do this,” he said. “We just have to as a country, as a nation ... invest in football.”

“It’s like me going out there and singing with my father, I guess,” she said. “Can I out-sing you? Maybe you shouldn’t do that. But you kind of want to do it, because you want to earn your own respect, stand on your own two feet. And the girls can do it.”

It’s a harsh and sad reality of the Women’s World Cup that getting here may still not be enough to convince reticent soccer executives back home that real investments could pave the way to more success down the road. But look at what the Reggae Girlz have achieved without the help of the federation. It’s not hard to imagine what they could accomplish with even modest investments beyond what Marley and a patchwork of charitable efforts have provided.

I asked Marley what needed to change.

“Everything,” she said. “From top to bottom. We were talking about getting a broom and sweeping, and I said, ‘No. We need a vacuum for this shit because it’s so dirty, it’s so muddy.’”

Maybe the federation is finally moving in the right direction. The Reggae Girlz recently signed a contract that will pay $800 to $1,200 per month, retroactive to January, while the coach will receive $40,000. (The Jamaica Football Federation also said it had spent $4 million on the team, though the coaches dispute that.)

But if the federation doesn’t learn the lesson of this World Cup — if it tries to shirk its responsibility again — it’ll hear from Cedella Marley.

“If the Federation wants to play muddy,” she said, “I got the voodoo for them bitches.”