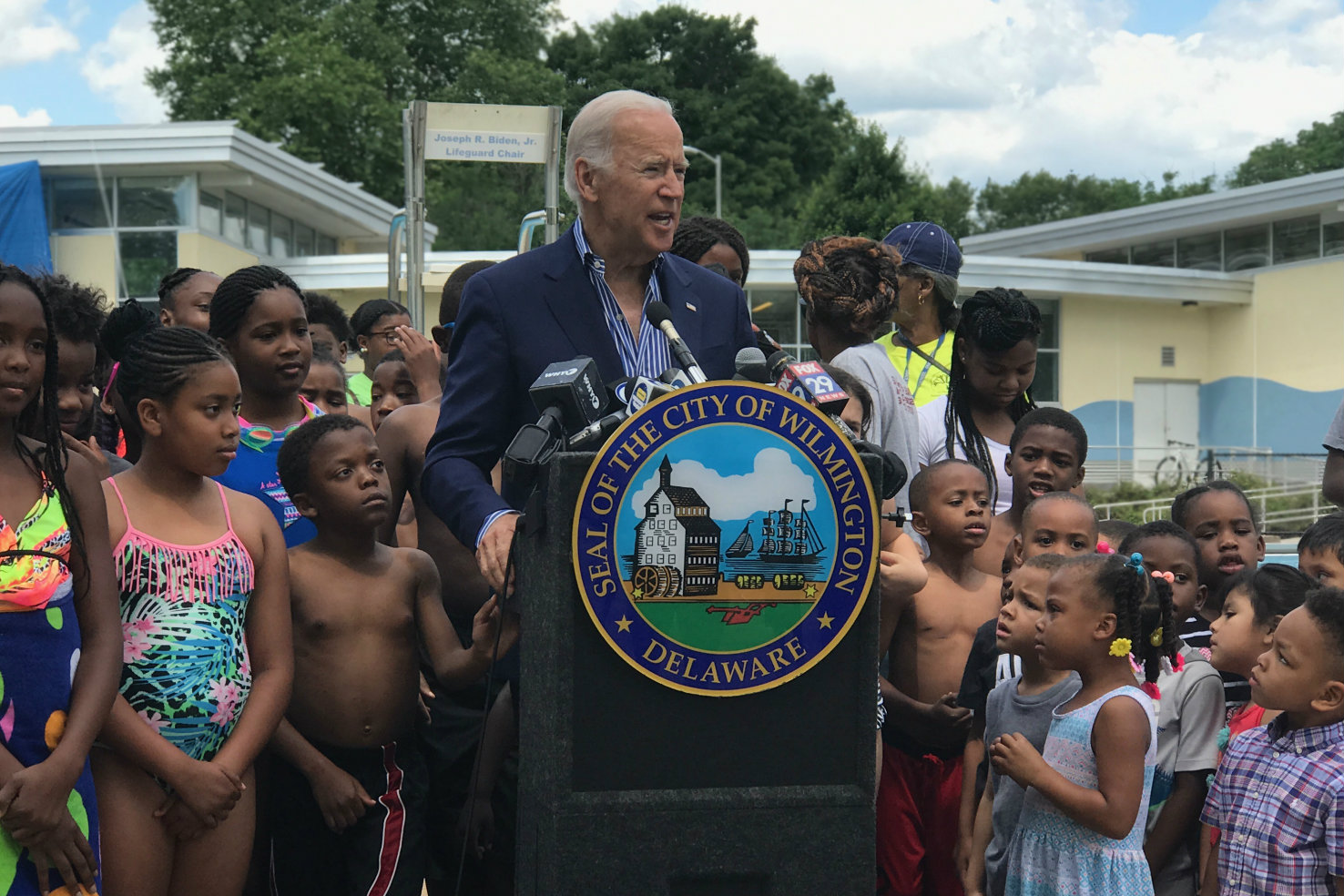 A newly surfaced video clip from 2017 shows Joe Biden recounting a bizarre alleged incident in which he deftly avoided a razor-and-chain fight with a gang leader named Corn Pop, when Biden was serving as the only white lifeguard at a predominately black Delaware pool in the summer of 1962.

Biden's explanation of how he made Corn Pop stand down was making the rounds on social media as the former vice president was seeking to burnish his credentials with black voters. His extraordinary lifeguarding tale was immediately questioned by commentators with sway in the black community -- however, some corroborating evidence emerged later in the day Sunday indicating some version of that tale really did happen.

The former vice president has long claimed that he had applied to be a lifeguard at the pool to better understand black America, and wrote in his 2007 memoir that Corn Pop often tormented him at the pool. For example, Biden said Corn Pop -- the purported leader of a gang called "the Romans" -- would insult Biden's mother to distract him so that people could sneak into the pool.

"I learned a lot. And I learned that it makes a difference," Biden said in the 2017 video clip, which documented the ceremony in which the Brown-Burton-Winchester Park was renamed the Joseph R. Biden Jr. Aquatic Center.

"This was the diving board area, and I was one of the guards, and they weren't allowed to -- it was a 3-meter board. And if you fell off sideways, you landed on the damn, er, darn cement over there," Biden said.

What is going on? I’m really confused and I feel like I’m losing my mind pic.twitter.com/S0B4xMyJCW

Some members of the crowd laughed, apparently at Biden correcting his language, as a small gathering of black children surrounding Biden looked ahead, seemingly disinterested.

"And Corn Pop was a bad dude. And he ran a bunch of bad boys. And back in those days -- to show how things have changed -- one of the things you had to use, if you used Pomade in your hair, you had to wear a baby cap. And so he was up on the board and wouldn't listen to me. I said, 'Hey, Esther, you! Off the board, or I'll come up and drag you off.' Well, he came off, and he said, 'I'll meet you outside.'"

Biden's comments were a reference to competitive swimmer-turned actress Esther Williams, who died in 2013.

"My car was mostly, these were all public housing behind us," Biden continued. "My car - there was a gate on here. I parked my car outside the gate. And he said, 'I'll be waiting for you. He was waiting for me with three guys with straight razors. Not a joke. There was a guy named Bill Wright the only white guy and he did all the pools. He was a mechanic. And I said, 'What am I gonna do?' And he said. 'Come down here in the basement, where all the mechanics- - where all the pool builder is.' You know the chain, there used to be a chain that went across the deep end. And he cut off a six-foot length of chain, and folded it up and he said, 'You walk out with that chain, and you walk to the car and say, 'you may cut me man, but I'm gonna wrap this chain around your head.'"

Biden continued: "I said, 'You're kidding me.'" He said, 'No if you don't, don't come back.' And he was right. So I walked out with the chain. And I walked up to my car. And in those days, you remember the straight razors, you had to bang 'em on the curb, gettin' em rusty, puttin' em in the rain barrel, gettin' em rusty? And I looked at him, but I was smart, then. I said, 'First of all,' I said, 'when I tell you to get off the board, you get off the board, and I'll kick you out again, but I shouldn't have called you Esther Williams, and I apologize for that. I apologize.' But I didn't know that apology was gonna work."

"He said, 'you apologize to me?'" Biden went on. "I said, 'I apologize but not for throwing you out, but I apologize for what I said.' He said, 'OK,' closed that straight razor, and my heart began to beat again."

Reaction to the clip was a mixture of befuddlement and skepticism.

"What is going on? I'm really confused and I feel like I'm losing my mind," journalist Yashar Ali wrote.

And, contemporaneous newspaper reports uncovered by CNN reporter Daniel Dale revealed that an individual nicknamed "Corn Pop" did live in Wilmington, and died in 2016 at the age of 73. A former Wilmington mayor confirmed that the individual was the same person to whom Biden was referring.

Additionally, a gang called "the Romans" did exist, Dale found.

Biden is facing skepticism for a story he has told about a 1960s confrontation at a Wilmington, Delaware pool with a guy named Corn Pop -- partly because of the name Corn Pop.

Here's an obituary for Wilmington's William L. "CornPop" Morris, who died at 73 in 2016. (Thread) pic.twitter.com/HGuLyorEvW

Some of the skepticism has been about the name of the gang or crew Biden said CornPop ran with, the Romans. Here's an article from Delaware's News Journal in which a local historian says there was a Wilmington gang called the Romans in the 1960s. pic.twitter.com/A4ePc4hnDX

Speaking after Biden at the 2017 dedication, Rep. Lisa Blunt Rochester, D-Del., later referred to the gang leader as "Pop Corn," and told attendees that Biden's story was "special" because it "showed the kind of man that Joe Biden is."

"He wasn't afraid to be the only white lifeguard here," Rochester said. "He never shied away. And so, to me, this pool is really representative of this man. ... This pool acts as an inspiration to us. He was basically saying, 'stay woke,' before millenials were saying 'stay woke.' And, that's the situation we're in right now. And so, this pool is a representation of you. We love you. Thank you so much for all of your service."

But, others had their doubts.

"They told Biden that Corn Pop carried a straight razor and was gonna be waiting for him when he got off work," wrote The Root's Michael Harriott. "Now you and I both know that, if this was true, Biden would've just called the cops to walk him to the car."

Harriott added: "Anyway, Biden says, instead he wrapped a 6-foot metal chain around his arm and wrapped that in a towel. Because everyone knows there are ample black chains just laying around the 'African-American community' but no police officers."

Thread: I'm always astounded by the imaginings of white people as it relates to race. Many of them have this fictionalized jigaboo version that is almost alien-like. And one of the greatest examples of this ever is Joe Biden's story about Corn Pop the gangsta.

It's "already been demonstrably proven Biden will make stuff up," Harriott noted.

Biden, indeed, earnestly has told inaccurate stories in the past. A headline in The Washington Post last month, for example, read simply: "As he campaigns for president, Joe Biden tells a moving but false war story."

That incident involved an inaccurate claim by Biden that he had brushed aside security concerns to travel to Afghanistan, on a general's request, to pin a Silver Star on an American soldier who rappelled into a ravine to retrieve a dead comrade. Biden gave his "word as a Biden" that he was telling "God's truth" as he explained that the soldier resisted Biden's efforts to pin the Silver Star on him.

"Except almost every detail in the story appears to be incorrect," the Post found. "Based on interviews with more than a dozen U.S. troops, their commanders and Biden campaign officials, it appears as though the former vice president has jumbled elements of at least three actual events into one story of bravery, compassion and regret that never happened."

Biden later dismissed concerns about his apparent fabrications as irrelevant.

Commentators also have doubted many of Biden's other claims. For instance, The Washington Free Beacon's Alex Griswold reacted with skepticism to a Biden story about how his father, in the 1950s, had reacted to the site of two men kissing by telling his son: "Joey, they love each other, it's simple."

"Oh sure, I absolutely believe that Joe Biden saw two men kissing publicly in the 1950s, and that his Irish-Catholic father reacted by approving of it," Griswold wrote.