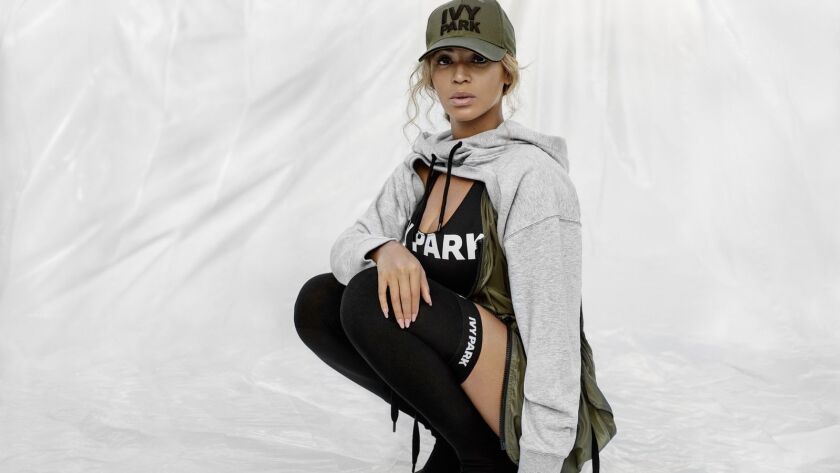 January 18: Save the date in your G-cal, set a reminder on your phone, and notify the group chat, because it's the day Beyoncé's Ivy Park x Adidas range officially debuts.

She initially teased the line in her ELLE January 2020 cover story, and I, for one, was READY. Then, in the wee hours of Wednesday night, January 8, Beyoncé turned to Instagram with a spicy photoshoot and beautiful accompanying video of her and models showcasing the unisex pieces. My savings account is shaking.

In one photo, Bey is basically looking through my soul as she rests on a bicycle in a maroon bodysuit fashioned with puffed sleeves and an orange-lined, plunging collar. She's wearing matching maroon sock boots with the words Ivy Park inscribed in orange.

The maroon/orange color palette runs throughout the collection, as evidenced in the one-minute visual. Models Ebonee Davis and Adonis Bosso and K-pop star CL show off tracksuits (in varying lengths and unisex styles), leggings, cropped tops, and sneakers.

Then Beyoncé takes over, jumping around in a flowing orange duster jacket, and later, a white fitted hoodie and joggers with a split-hem. The videos ends with a shot of her gold Ivy Park grillz.

But the red pleated gown with a deep-v neckline and sheer puff sleeves has my name written all over it. Beyoncé wears the dress with the Ivy Park iteration of the classic Adidas Samba silhouette, featuring a white leather upper, the three-stripe design in burgundy, and an orange lining above the gum sole.

Speaking to ELLE about her new collection, Beyoncé said this line is "fun and lends itself to creativity, the ultimate power. I focused on designing a unisex collection of footwear and apparel because I saw so many men in IVY PARK. The way they have embraced the brand is an unexpected gift. I appreciate the beauty of gender-neutral clothing and breaking the so-called fashion rules."

Remember folks, January 18. Sign up for updates at adidas.com/ivypark.