Azealia Banks has been accused of being a lot of things over the years — “crazy” being one of them. Despite any consequences, Banks consistently speak her mind.

Over the weekend, the 28-year-old Harlem native popped up on her Instagram Stories to (once again) announce her retirement — in true Azealia Banks fashion. Throughout her post, she lamented the current crop of artists and put in herself in an elite class.

“Lol, I love the gays and love how much y’all love me but I really have to eject,” she wrote. “I think you guys are into a lot of shit/people I just don’t find value in. I find myself acknowledging/looking at shit I’m leagues above and it really is such a set back lol.

“I really, truly, honestly could not give a fuck about any of the people y’all suggest for me to collab with/acknowledge and I only do in efforts to humor y’all.”

Banks then took a stab at Iggy Azalea and Tinashe.

“When so many of you are on here begging me to collab and acknowledge random people/artists it’s too distracting and I cannot keep going thru my art/journey with y’all in my face 24/7,” she continued. “I really can’t allow y’all to keep throwing me in the bucket with Iggys/Tinashes/random drag queens just because I’m female and you guys play Barbie dream house with the names and create this culture of shared data.” 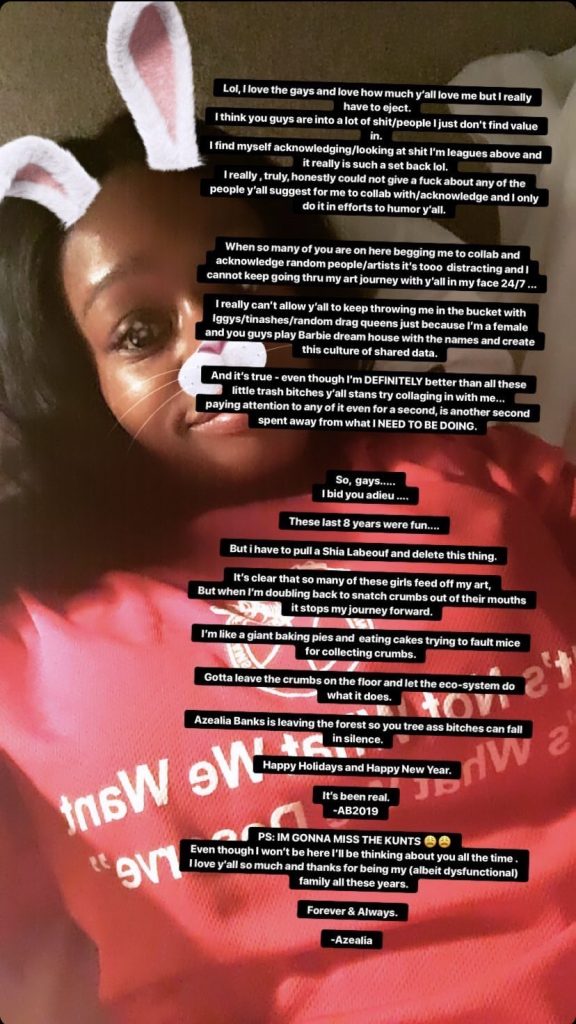 Banks added she is confident in her abilities but is tired of being distracted by “these little trash bitches.”

“And it’s true – even though I’m DEFINITELY better than all these little trash bitches y’all stans try to collaging in with me…paying attention to any of it even for a second, is another second spent away from what I NEED TO BE DOING.

“So gays…I bid you adieu. These last 8 years were fun…But I have to pull a Shia LaBeouf and delete this thing. It’s clear that so many of these girls feed off my art, But when I’m doubling back to snatch crumbs out their mouths it stops my journey forward.”

Finally, she compared herself to a giant who is departing the forest.

“I’m like a giant baking pies and eating cakes trying to fault mice for collecting crumbs,” she concluded. “Gotta leave the crumbs on the floor and let the eco-system do what it does. Azealia Banks is leaving the forest so you tree ass bitches can fall in silence. Happy Holidays and Happy New Year. It’s been real.” 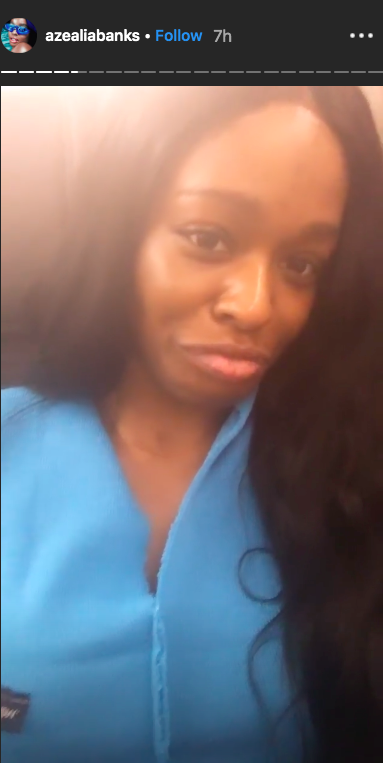 But during a red-eye flight on Monday (December 2), Banks hit up her Instagram Stories again and appeared to backtrack on her announcement. Instead, she confirmed she was working on new music.

“Now I’m going back to LA to finish some music and just finish some videos,” she said. “Prepare you bitches for another year of not being able to take Azealia Banks.”

This is the second time this year Banks has teased her retirement. In June, she claimed she was “entirely too good for 3/4 of the public” and chided her fans for only being interested in controversial stories about her.

“you guys will ALWAYS BE MORE CONCERNED WITH BAD NEWS ABOUT ME THAN ANY OF THE PHENOMENAL MUSIC I MAKE BECAUSE ITS HOW YOU’VE BEEN TAUGHT TO RELATE TO ME,” she wrote in all caps. “IT DOESNT MATTER HOW GOOD MY MUSIC IS I KNOW YOU GUYS DONT DESERVE IT.”

She ended with, “YOU WILL NEVER GET ANOTHER BODY OF AZEALIA BANKS WORK AGAIN. HEAR ME!?!”

Yet in September, she returned with her latest project YUNG RAPUNXEL PT II.