Black hair is political. There’s no way around that. The way Black people style their hair long has been closely associated with our personal pride and the power that we’ve sought to reclaim. This is especially true of those who have been at the forefront of political and social movements.

Whether it’s during a push for equality or in a bid for an elected office, Black hair has reflected the climate of the time and the progress leaders and revolutionaries were striving to attain. From Angela Davis’ Afro to Ayanna Pressley’s twists, here are just a few of the most iconic political figures and styles in Black hair history. 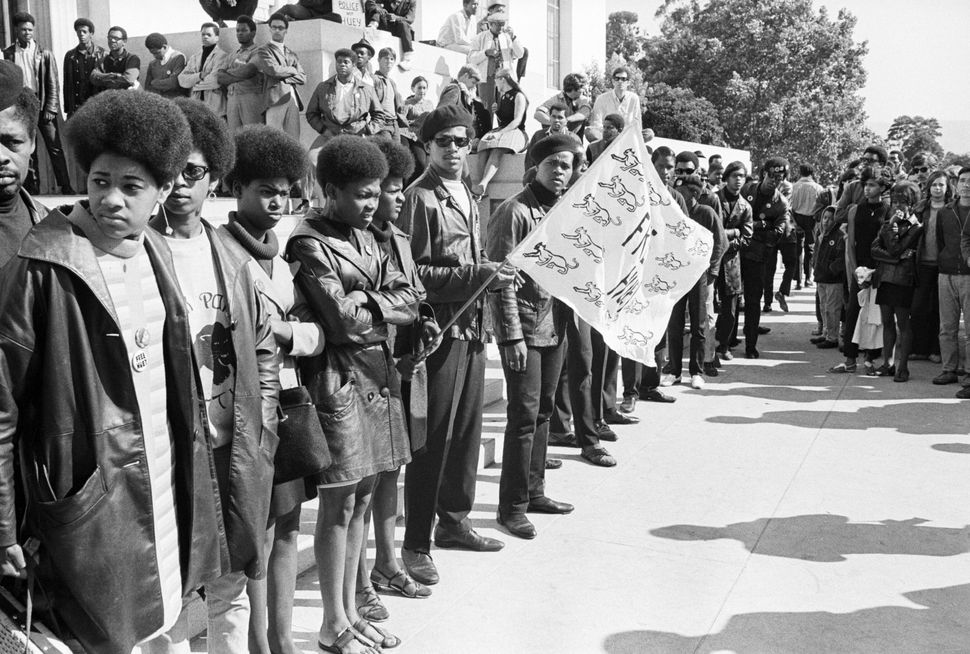 Black Panther Party members and sympathizers gathered outside the courthouse in Oakland during the 1968 trial in which party leader Huey Newton was found guilty of voluntary manslaughter in the killing of a police officer. The conviction was overturned on appeal and the charges against Newton eventually were dropped.

The Afro has become one of the most widely recognized symbols of the fight for Black liberation. Prior to the late 1960s, many Black people were straightening their hair due to society rejecting natural Black hair textures. At the dawn of the Black Power movement, however, the Afro became synonymous with pride and beauty. It also was heavily associated with activism as key players of the Black Panther Party and other civil rights activists unabashedly rocked their perfectly shaped ’fros. From Angela Davis to Jesse Jackson, revolutionaries and activists in this era who helped reclaim and rebrand what beauty meant for Black Americans. 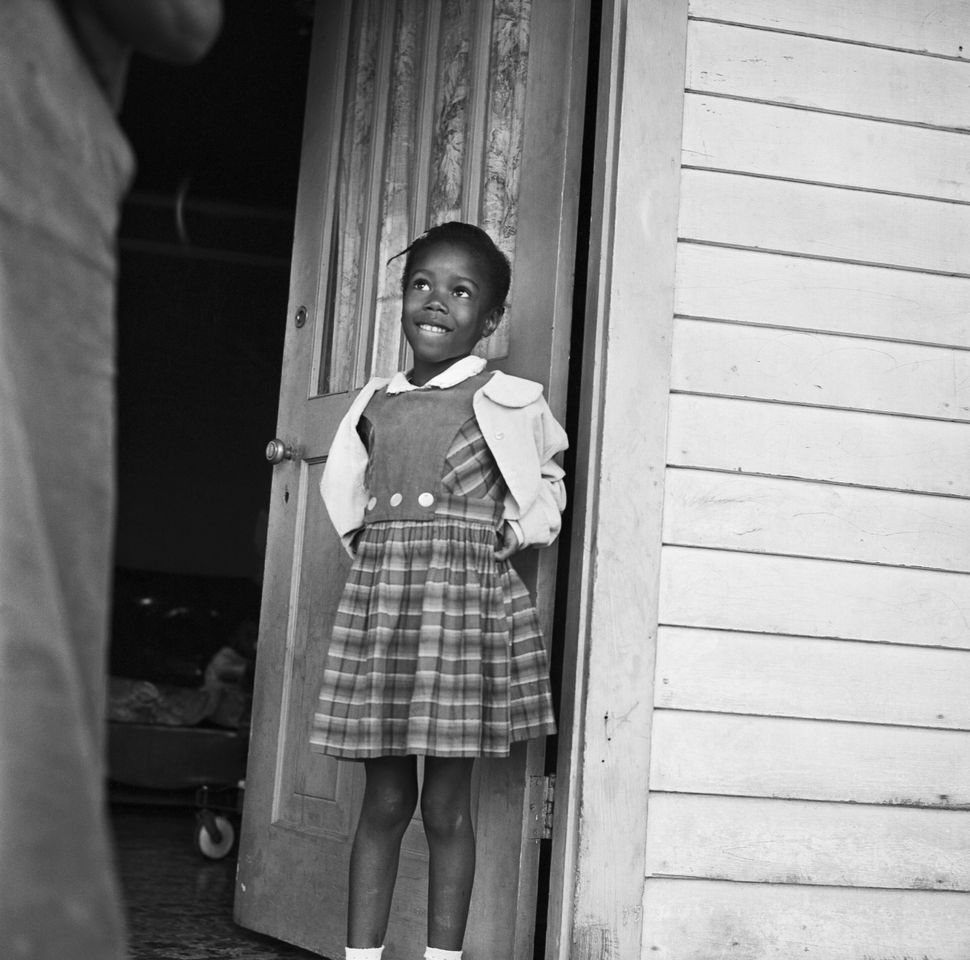 In 1960, Ruby Nell Bridges of New Orleans became one of the first Black children to integrate an elementary school in the Deep South.

Ruby Bridges didn’t ask to be one of the most prominent and significant faces of desegregation when, at 6 years old, she just needed to go to school in New Orleans. But this little girl, despite the hate and vitriol spewed at her, carried on to become one of the first Black students to integrate an elementary school in the Deep South. And she showed up, every day, wearing her hair in pigtails and barrettes like many young Black girls still wear to this day. One of the most iconic depictions of young Bridges, who continued her journey in activism, is Norman Rockwell’s famous 1964 painting of the child being escorted to school by the National Guard, determined to get an education. Bridges’ story and style made such an impression that kids often go viral today on social media when their Black parents dress them up as the civil rights icon. 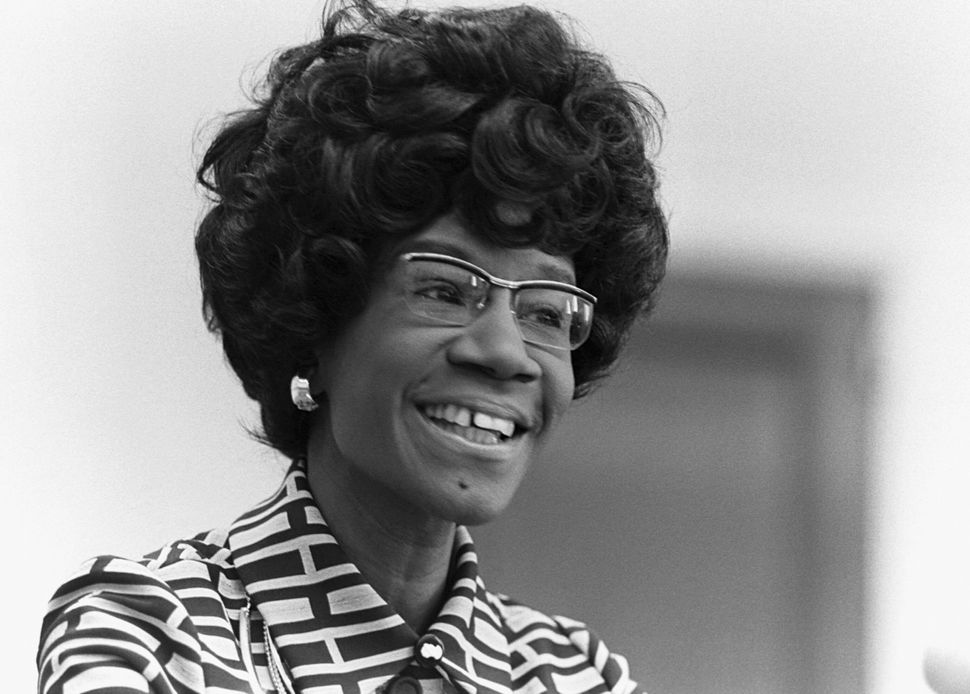 Rep. Shirley Chisholm (D-N.Y.) made history on a number of fronts, including becoming the first Black woman elected to Congress.

Shirley Chisholm’s signature perfectly coiffed hairstyle was by no means a coincidence. As the first Black woman elected to Congress and, in 1972, the first woman to seek one of the major political party’s presidential nomination in 1972, Chisholm knew the importance of presentation. She was a revolutionary in a field that still had staunch views on what Black hairstyles were considered “professional.” From the time she launched her career in politics in 1964, the “unbought and unbossed” Brooklyn native put her best foot forward to enact real change and that happened to include the way she rocked her hair. 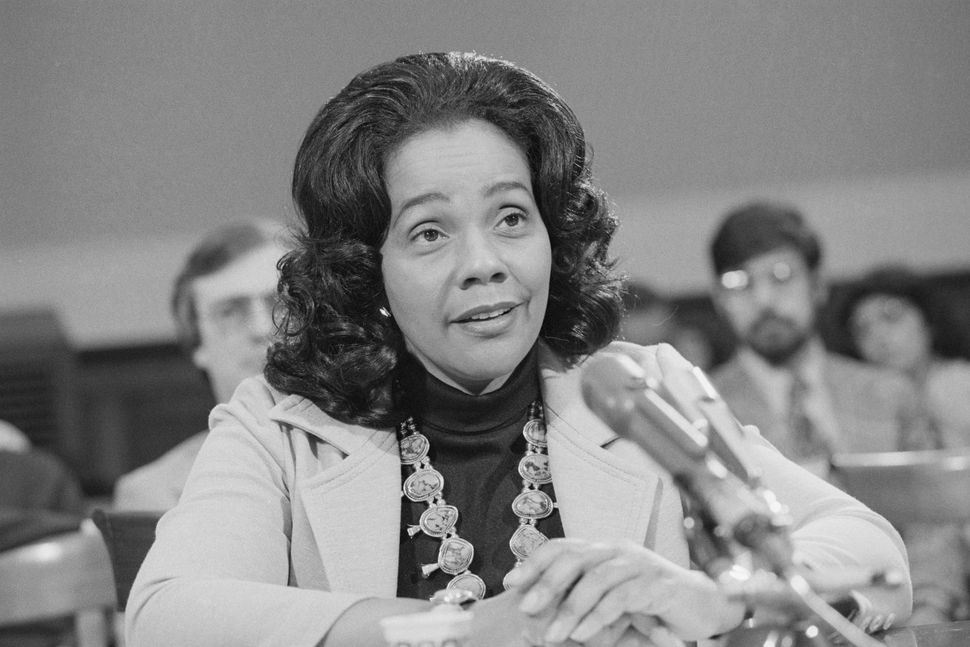 Coretta Scott King carried on her famed husband’s fight for racial equality after his assassination in 1968, and also fought for rights for the LBGTQ community.

Presentation was a vital part of not only seeking progress in the Civil Rights movement but also key for survival. Coretta Scott King and her elegantly curled hairstyles that cascaded to her shoulders were undoubtedly a signature part of her freedom fighter uniform. As an activist and the wife of Martin Luther King Jr., she was constantly in the public’s eye. And with Black hair still being rejected by society, King and so many other Black women knew they couldn’t give America any reason to believe they were “unprofessional” in order to effect change at that time. 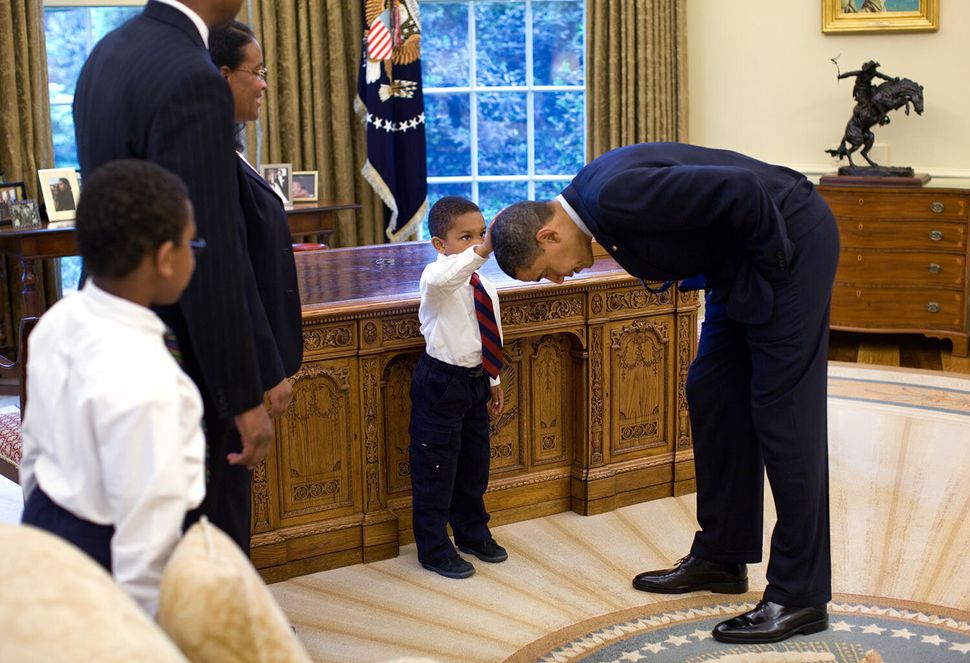 When a 5-year-old visiting the Oval Office in 2009 asked if he could touch President Barack Obama’s hair to see if it felt the same as his, the result was one of the seminal photographs of Obama’s White House tenure.

In May of 2009, one of the most iconic photos of Barack Obama’s presidency was snapped. He bent over so that Jacob Philadelphia, a 5-year-old Black boy and son of a White House staff member, could touch his hair and see that they had similar textures. “I want to know if my hair is just like yours,” Jacob said, to which the president replied, “touch it, dude.” That brought forth the beautiful moment of intimacy between a young Black boy and the leader of the free world in the Oval Office where for the first time, Jacob and so many other kids could see themselves in the president. Though Obama only has a simple, traditional Caesar cut, this moment illustrated the power of representation. 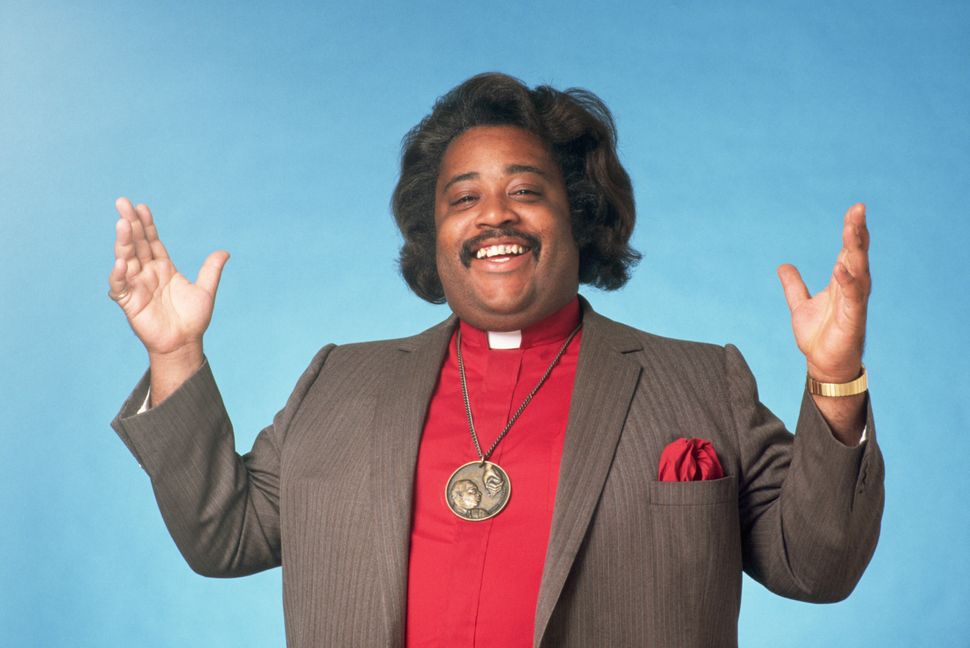 The Rev. Al Sharpton poses for a portrait during his early days as a public figure.

Al Sharpton has been rocking his permed hair for decades. The preacher and activist has had both high and low moments with his hair, but his tresses in the 1980s were luxurious enough for the Godfather of Soul himself to take note. Sharpton explained how James Brown, his mentor, took him to his stylist to get his hair done ahead of a meeting with President Ronald Reagan as part of the lobbying to make Martin Luther King Jr. Day a national holiday. “He said, ‘I want [Reagan] to see a younger version of me when he sees you,’” Sharpton told Ebony. “After I did it, he said he wanted me to keep my hair like that until he died, as our bond. So that’s how I ended up with this hairstyle.” 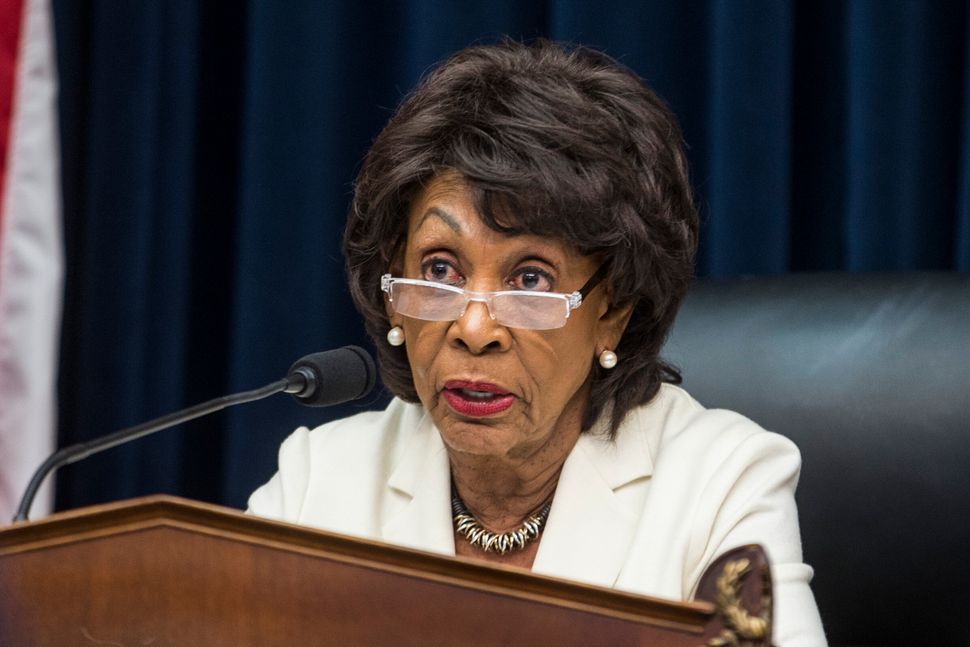 Name a time when a hair has been out of place on Maxine Waters’ head. You can’t because that moment doesn’t exist. The signature hairstyle sported by the outspoken Democratic House member from California is perfectly side-swooped to the left and curled under. It’s the style of a woman who means business. So when conservative commentator Bill O’Reilly compared Waters’ hair to a “James Brown wig” in 2017, he didn’t even realize the nerve he was hitting. Not only did that comment spark folks to speak out through the viral hashtag #BlackWomenAtWork created by Brittany Packnett, but it also prompted a rousing response from Waters: “I am a strong Black woman, and I cannot be intimidated. I cannot be undermined.” 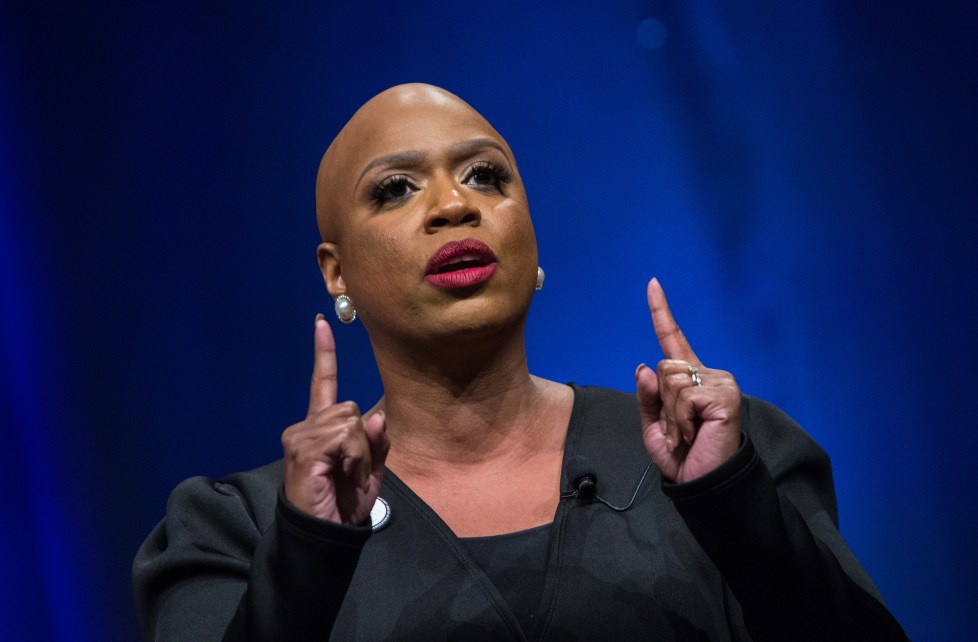 In 2018, Democratic Rep. Ayanna Pressley became the first Black woman elected to Congress from Massachusetts and also the first federal lawmaker to wear Senegalese twists. By wearing her twists, she emboldened many other Black women to proudly wear their braids and twists at work. In January, she made history again when she revealed she had been living with alopecia ― hair loss on the scalp and other parts of the body ― for several months. “I think it’s important that I’m transparent about this new normal,” Pressley told The Root, as she prepared to reveal her perfectly bald head to the public for the first time. Though she said she was still early in her journey of accepting her new reality, she told the outlet, “I hope this starts a conversation about the personal struggles we navigate and I hope that it creates awareness about how many people are impacted by alopecia.” 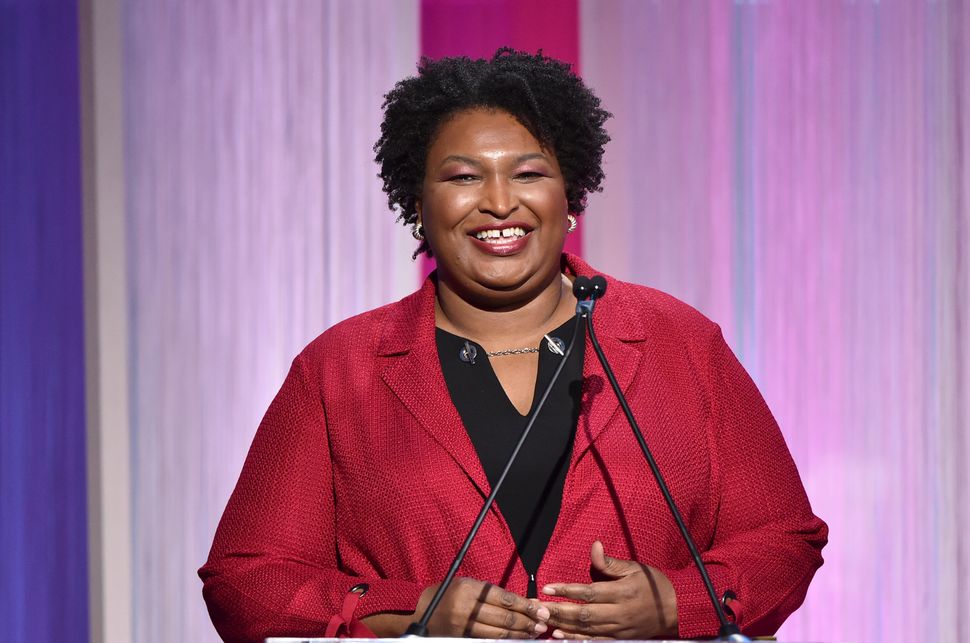 Democrat Stacey Abrams, who served a decade in the Georgia Legislature, lost the state’s governorship by a razor-thin margin in 2018. She emerged from her bid as a national figure.

Stacey Abrams’ natural coils have been a refreshing change of pace to so many of the monotonous hairstyles seen on American politicians. When she ran for governor of Georgia in 2018, however, she faced some irrelevant beauty standards as a challenge. During an interview with OWN last year, the Democrat admitted that she had to ignore them and stay true to herself. “I ran for governor as a sturdy woman with natural hair and a gap between my teeth,” she proudly said during the interview. 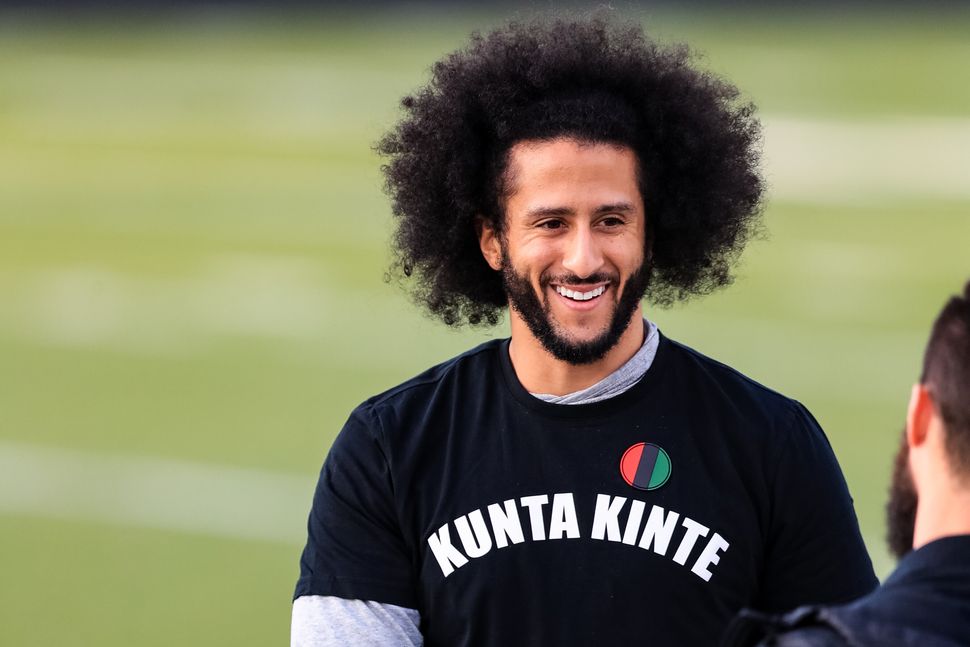 NFL Quarterback Colin Kaepernick’s highly publicized stan for social justice may have short-circuited his playing career, but it earned him a national following.

Once Colin Kaepernick took out his braids, nothing was the same. As he established his place as a leader in social justice, the image of the then-San Francisco 49er quarterback kneeling on one knee during the playing of the National Anthem before a 2016 preseason game while wearing his giant Afro became synonymous with a movement. As his protest ― emulated by several other players on his team and others ― focused attention on state violence against Black people in America, folks on social media likened his ’fro to the revolutionaries that came before him in the ’60s and ’70s. It quietly represented a sense of pride ― as well confirmation that there was still so much work to be done in the fight against racial inequality.