Awkwafina has made Golden Globes history.

"The Farewell" star is the first performer of Asian descent to win a Golden Globe Award in a lead actress film category.

She's only the sixth woman of Asian descent to be nominated in the lead actress in a musical or comedy category.

The others were Machiko Kyo (1956's "The Teahouse of the August Moon"), Miyoshi Umeki (1961's "Flower Drum Song"), Yvonne Elliman (1973's "Jesus Christ Superstar"), and Constance Wu (2018). Hailee Steinfeld, whose mother is of Filipino descent, was also nominated for her work in "Edge of Seventeen."

Wu's nomination last year was notable for ending a disappointing drought of female nominees of Asian descent that lasted almost half a century.

Awkwafina joins a small group of performers of Asian lineage who have won Golden Globe awards since the show started. Sandra Oh is the only performer of Asian descent to have won twice. 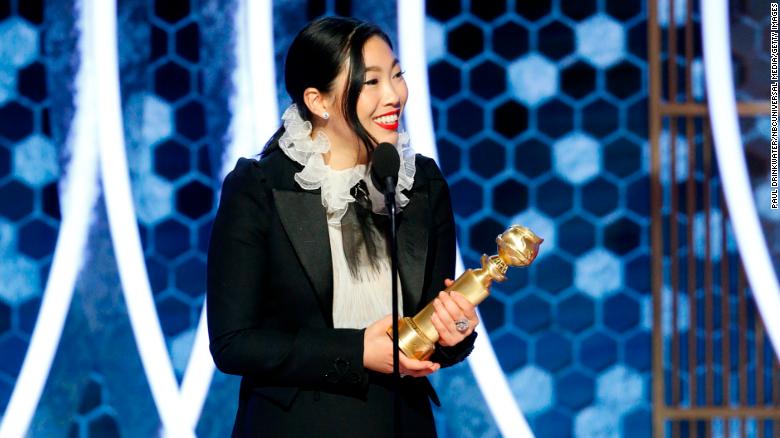 "The Farewell," which features as predominantly Asian cast, tells the story of a young woman named Billi (Awkwafina) whose family decides to keep news of a terminal diagnosis from the family's elder matriarch, Billi's grandmother Nai Nai (Shuzhen Zhao).

In her acceptance speech, Awkwafina said Wang gave her "the chance of a lifetime" and "taught me so much."

She dedicated her award to her father.