An Arizona school has publicly apologized for the impact of a recent exercise after criticism from at least one parent who said a recent lesson surrounding the civil rights movement put her black 9-year-old son’s “emotional [well-being]” at risk.

Rosalind Thompson, the head of school at BASIS Phoenix Central, a charter school serving grades K-5, announced on Wednesday that the school’s leadership regretted the “strong emotional response” to the exercise by some, according to a statement on the school’s Facebook page.

“We apologize for not fully recognizing and addressing the potential different perspectives that could be raised by the exercise prior to its implementation,” the statement continued.

Last Friday, Arizona mother Claudia Rodriguez shared a Facebook post criticizing the school for her son’s apparent involvement in the class exercise, which was purported to teach BASIS third-graders about the Little Rock Nine.

The Little Rock Nine were a group of nine black high school students who braved crowds of angry white protesters and mobs to attend a previously racially segregated school in Little Rock, Arkansas, in 1957. On Sept. 25 that year, former President Dwight D. Eisenhower sent federal troops to escort the nine students to school after continued threats of violence.

Rodriguez wrote on Facebook that the exercise at BASIS was, “AT THE EXPENSE OF MY CHILD’S EMOTIONAL [WELL-BEING].”

According to Rodriguez, her son walked through the classroom during the exercise as other students and staff would allegedly “yell, humiliate and berate him.”

“I felt the need to speak up so that no other child ever has to feel what my son felt,” she wrote. Her post has since garnered more than 400 comments, with many expressing their shared outrage over the matter.

The school’s spokesperson Phil Handler told HuffPost via e-mail that Thompson and other officials at BASIS met with community leaders this week and plan to meet again in the future.

“Ms. Thompson, as an African-American woman who grew up in the south in the 1960s, has vivid memories of the Civil Rights Movement, and it’s clear that she and her teachers believe it’s important for students to appropriately learn about it,” he said. “Teachers and administrators across our network of schools believe that, too.” 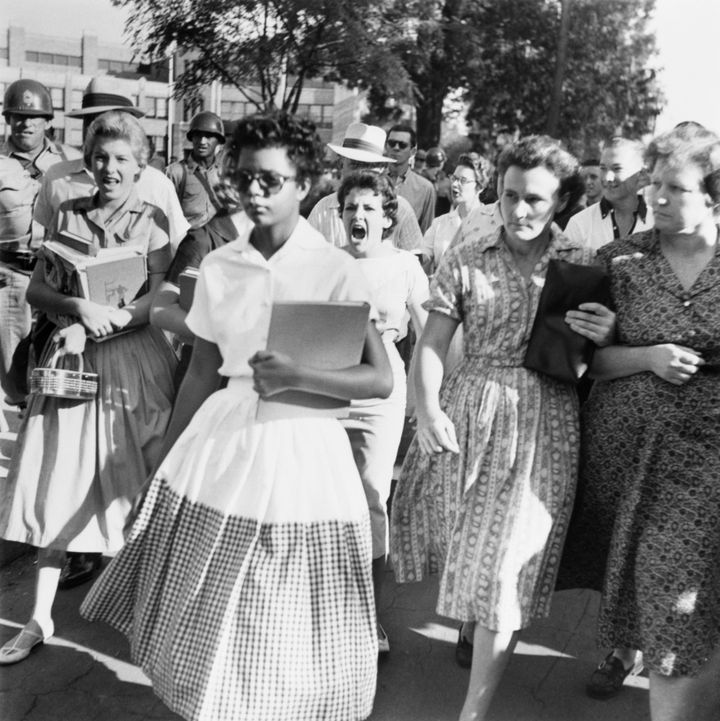 On Monday, Thompson initially responded to the swift backlash in a Facebook post to “re-clarify” the intent of the exercise, she explained.

“The exercise in our Humanities class was to have students volunteer to play the roles of several different people present on the day the Little Rock Nine walked into school,” Thompson wrote, adding that students who were tasked to yell were “specifically instructed not to use words.”

Thompson also noted in the statement that the teacher who led the exercise had previously communicated to parents that there would be lessons with “sensitive topics,” but that this particular exercise concerning the Little Rock Nine was not discussed with parents in advance.

The head of BASIS added in Monday’s Facebook statement that the school had also received “an overwhelmingly positive response” from families over the exercise.

At least one parent, Vinita Bhatnagar, told the Arizona Republic that she did not believe the exercise, which her daughter also participated in, was “out of line in any way.”

But Rodriguez said in comments on Facebook that the incident was “awful” for her son.

Crews, who attended a community meeting with BASIS leadership this week said the initial meeting was “the first step.”

“We need to tell our stories and talk about our history, but we don’t need to so at the expense of our children,” he said, adding that black students across the U.S. have often faced incidents in schools where there’s a “fetishizing” of black pain.

When asked whether the 9-year-old student volunteered for the activity, Crews said that “even if he volunteered,” the child was not aware of the gravity of the situation and did not sign up for “trauma.”

The controversy follows a number of school incidents over recent years that have sparked wide conversations over the trauma black students can experience during misguided lessons on the civil rights movement and slavery.

In February, a Virginia public elementary school came under fire after parents criticized the school for a Black History Month “game” based on the Underground Railroad.

Thompson noted in her statement on Monday that the exercise was loosely based on the work of anti-racism educator Jane Elliott, who’s famous for her lauded “blue eyes/brown eyes” experiment she devised in the late 1960s.

But unlike the simulation at BASIS, Elliott’s exercise was conducted in a classroom of all-white children, with the intention to educate white youth about the effects of racism after Martin Luther King Jr.’s assassination.

Thompson noted on Facebook on Wednesday that she had a “productive meeting” with community leaders on Tuesday to “further explore the issues raised by the Little Rock Nine simulation.”

“Moving forward requires an increased understanding of the cultural differences and sensitivities that inform how we talk and teach about these issues, and respond to parents’ deeply held concerns,” she continued.