The pop star Ariana Grande is suing Forever 21, claiming that the fashion retailer sought to trick customers into thinking Grande endorsed its brand by posting photos of her on its social media accounts and using a model who looked “strikingly similar” to her.

The lawsuit, filed Monday in Federal District Court in Los Angeles, mostly revolves around imagery from Grande’s music video “7 Rings,” which depicts a pink-tinged house party for a bejeweled Grande and her friends. The lawsuit takes issue with posts from Forever 21’s Instagram account that include snapshots from “7 Rings” and advertisements in which the “look-alike model” — a brunette with a slicked back high ponytail — is dressed similarly to Grande in the video.

In one post on Forever 21’s Instagram account, the model wore a hairpiece with two pink puff balls. The caption echoed lyrics from “7 Rings” (“Gee thanks, just bought it”) and asked viewers to “shop our favorite trend.” In another post, the model wore camouflage capris and pink stilettos, urging users to “swipe up to shop.”

“The resemblance is uncanny and Forever 21’s intent was clear: to suggest to the viewing public that Ms. Grande endorsed Forever 21, its products, and was affiliated with Forever 21,” the lawsuit said. 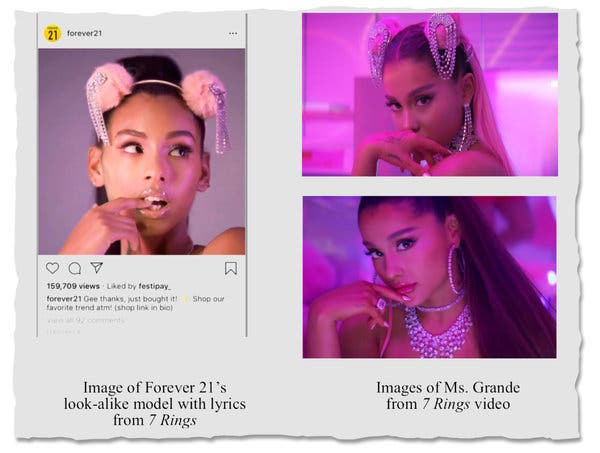 After Grande released the hit song “Thank U, Next” last November, Forever 21 reached out to her representatives to suggest an endorsement deal that would be centered on social media, the lawsuit said. Grande’s representatives considered the deal but ultimately declined because the fashion retailer wasn’t willing to pay Grande enough.

A single Instagram post by Grande, 26, is worth “well into the six figures,” according to the lawsuit.

In February, after the release of the “Thank U, Next” album, Grande noticed the images and contacted her lawyers. Though Forever 21 agreed to take down all unauthorized posts, the lawsuit claims, they remained on the store’s social media account until mid-April. Grande also sued Riley Rose, a beauty company owned by Forever 21, accusing it also of misusing images from the “7 Rings” music video.

In a statement on Tuesday, Forever 21 said that it disputed the allegations in the lawsuit but could not comment further on pending litigation. The company said that it was a supporter of Grande and had worked with her licensing company over the past two years.

“We are hopeful that we will find a mutually agreeable resolution and can continue to work together in the future,” the statement said. 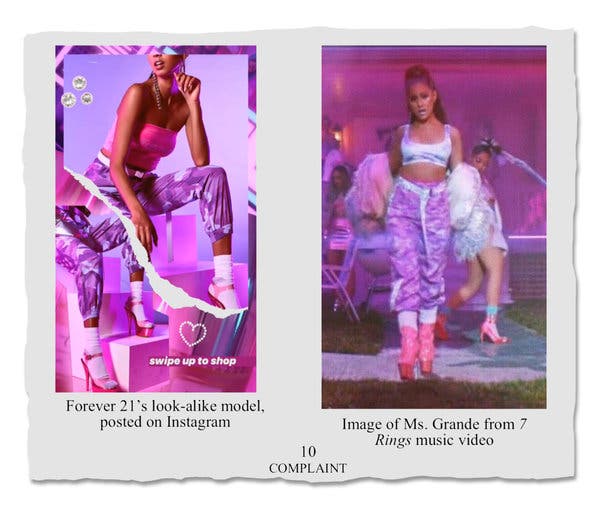 Grande’s lawsuit alleges a violation of her right of publicity, which refers to the pop star’s control over commercial uses of her name and identity. It also alleges false endorsement, trademark infringement and copyright infringement. The lawsuit asks for at least $10 million in damages.

In addition to the “7 Rings” snapshots, the lawsuit cited Forever 21 Instagram posts that included photos of Grande and images from the video for the song “Thank U, Next,” which paid homage to popular comedies like “Mean Girls” and “Legally Blonde.”

“It seems like there was a targeted effort by Forever 21 to use Ariana Grande’s identity in a way that might be likely to confuse consumers,” said Jennifer E. Rothman, a professor at Loyola Law School in Los Angeles who is not involved in the case.

Professor Rothman, who wrote a book last year called “The Right of Publicity,” said that Forever 21’s posting photos of Grande to advertise its brand seemed more legally problematic than dressing a model in a similar style. With the so-called look-alike model, Forever 21 could argue that they were simply mimicking a popular fashion trend and were protected by First Amendment rights.

“We can imagine that teenagers who love Ariana Grande are looking at her Instagram, dressing up themselves, maybe wearing Forever 21 clothes and posting it on Instagram,” Professor Rothman said.

That would be acceptable to the extent that “everyone knows it’s not Ariana Grande and that she’s not endorsing it,” she added.

In the 1990s, according to Professor Rothman’s book, Vanna White sued Samsung over a VCR advertisement that depicted a robot in a wig turning letters on “Wheel of Fortune.” (The idea was that the VCR would last so long that White, the game show hostess, would be replaced by automation. White is still on the show today.) A federal appeals court ruled that White could sue under California’s common law of right of publicity, and a jury awarded White more than $400,000.

Grande’s record-breaking hit “7 Rings” was the subject of its own plagiarism allegations, though they never progressed past online complaints. The rapper Soulja Boy posted tweets suggesting that Grande had borrowed from his song “Pretty Boy Swag.” And in a tweet that was later deleted, the rapper Princess Nokia accused Grande of copying from her song “Mine.” A representative for Grande did not respond to an email requesting comment.

“7 Rings” did give ample credit to two sources of inspiration: Rodgers and Hammerstein, who wrote “My Favorite Things” from “The Sound of Music.” Grande’s song plays off the musical theater classic, singing about eyelashes and diamonds and ATMs. Recognizing Rodgers and Hammerstein’s influence on the song, Grande’s representatives allowed the company that owns their rights to control 90 percent of the songwriting royalties.

But Grande has been the subject of her own infringement lawsuit, filed by an artist in Las Vegas over her “God Is a Woman” music video. The artist accused Grande of copying his paintings depicting the figure of a woman inside a candle’s flame. The lawsuit was settled this summer for undisclosed terms.