Apple's plan to take a page out of the Netflix playbook -- acquire a star-studded movie to play in theaters and generate Oscar buzz before streaming -- has run into a wall of scandal.

"The Banker," starring Samuel L. Jackson and Anthony Mackie, was supposed to close out the AFI Festival in Hollywood this week but was pulled at the last minute Wednesday for undisclosed reasons. The film is based on the true-life story of Bernard Garrett Sr. (played by Mackie) and Joe Morris (played by Jackson) as two African-American entrepreneurs in pre-civil rights Los Angeles who grew a real estate empire but recruited a white man to front their business.

Now The Hollywood Reporter has revealed claims of sexual abuse against one of the film's co-producers, Bernard Garrett Jr., the son of one of the main characters.

Garrett Jr.'s half-sisters, the Reporter claims, recently made Apple aware of the allegations. The sisters say that when the younger Garrett lived in their home, he sexually molested them over the course of a few years. Garrett Jr. and Nolfi did not respond to requests for comment, the outlet reported.

On Nov. 16, Cynthia Garrett tweeted out a trailer for the film with the caption, “Lies to hide the producer who sexually molesterdmy sister and I for years, then stole my mom’s life story with our dad. Wow!!! #TimesUp. This family will not remain silent.”

THE BANKER Trailer (2019) Samuel L. Jackson, Anthony Mackie Movie https://t.co/44EVCwKy1n via @YouTube. LIES TO HIDE THE PRODUCER WHO SEXUALLY MOLESTED MY SISTER AND I FOR YEARS THEN STOLE MY MOMS LIFE STORY WITH OUR DAD. WOW!!!!! #TIMESUP. THIS FAMILY WILL NOT REMAIN SILENT!

Garrett has since tweeted out the THR story outlining her allegations, as well as posted another statement on her social media page. “So sorry we can’t enjoy my mom and dad’s real story,” she wrote. “All this person had to do was stop compounding his abuse. It HURTS. But we simply had enough. #TimeHadToBeUp.”

So sorry we can’t all enjoy watching my mom and dads real story. All this person had to do was stop compounding his abuse. It HURTS. But we simply had enough. #TimeHadToBeUp

"The Banker" had listed Garrett Jr. as a producer and he was slated to be part of the press and marketing campaign for the film. But the Reporter said Garrett's name has been removed from the publicity materials. 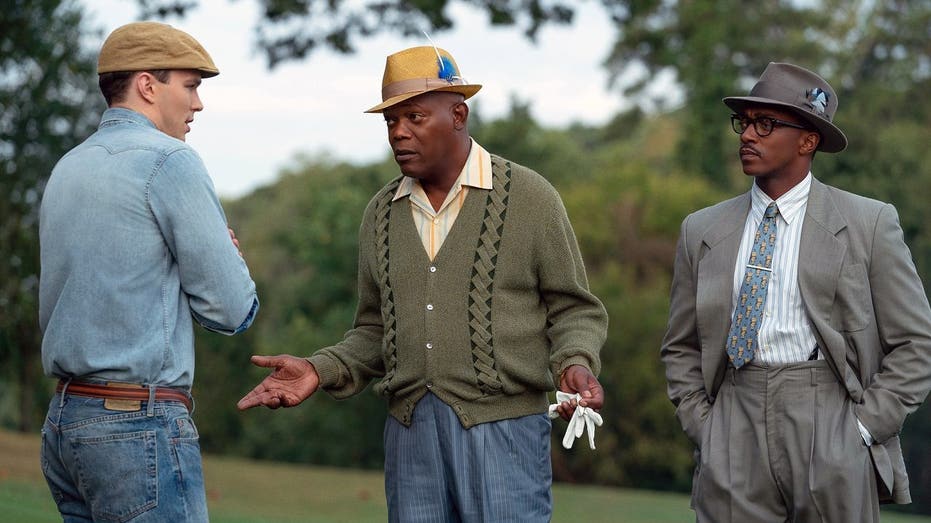 Streaming rival Netflix last spring tried to avert a public relations mess with its movie "Otherhood" starring Felicity Huffman, Angela Bassett and Patricia Arquette. It pulled the film from its April 26 release date in the wake of Huffman's involvement in the college admissions scandal. It finally premiered in July.

Streamers like Netflix, Amazon and now AppleTV+ have made it part of their business models to attend film festivals and purchase films that are already produced but are seeking distribution. It paid off for Amazon in 2017 when "Manchester by the Sea" won the Oscar for Best Picture.

In a statement earlier this week, Apple said, "We purchased The Banker earlier this year as we were moved by the film’s entertaining and educational story about social change and financial literacy. Last week, some concerns surrounding the film were brought to our attention. We, along with the filmmakers, need some time to look into these matters and determine the best next steps."