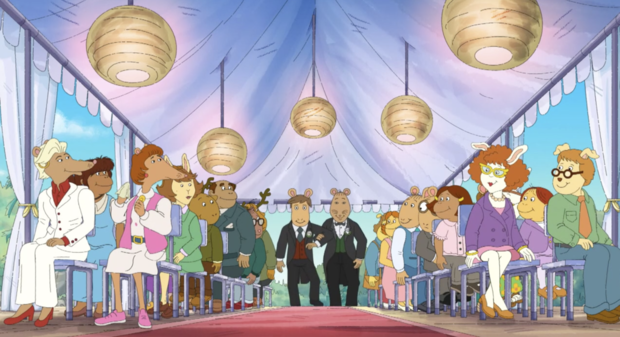 Season 22 of "Arthur" kicked off with a special wedding episode that had people across the country talking. However kids in Alabama did not see the May 13 episode, in which Arthur's teacher, Mr. Ratburn marries his partner. That's because it was never aired.

Alabama Public Television (APT) chose not to air the episode, entitled "Mr. Ratburn and the Special Someone," according to AL.com. Instead, "Arthur" fans in the state saw a rerun episode.

The decision was made back in April, when the local PBS station was notified about the content of the episode, Mike Mckenzie, director of programming at APT, told AL.com. CBS News has reached out to Mckenzie and several other people at APT for comment and is awaiting response.

Mckenzie told AL.com that APT has no plans to air the episode at a later date. "Parents have trusted Alabama Public Television for more than 50 years to provide children's programs that entertain, educate and inspire," Mckenzie said in an email to the station.

"More importantly – although we strongly encourage parents to watch television with their children and talk about what they have learned afterwards – parents trust that their children can watch APT without their supervision," he said. "We also know that children who are younger than the 'target' audience for Arthur also watch the program." In the premiere episode, Arthur and his friends worry their teacher is going to marry an uptight woman, but when they get to the wedding ceremony, they learn Mr. Ratburn is marrying a man. They're relieved and happy for their teacher.

It is not the first time APT has pulled an episode of the children's show from air. In a 2005 episode, Arthur's friend, Buster, meets a child who has two mothers. APT did not air that episode either.

At the time, APT's then-director, Allan Pizzato, told AL.com: "Our feeling is that we basically have a trust with parents about our programming. This program doesn't fit into that."

If parents in Alabama want their kids to see the season 22 premiere episode, "Mr. Ratburn and the Special Someone" is available on PBS' website.