Al Sharpton to the NFL: 'Give Colin Kaepernick his job back'

Rev. Al Sharpton delivered the eulogy for George Floyd at his funeral in Houston on Tuesday.

During his speech, he took the time to call out the NFL for its treatment of Colin Kaepernick.

Sharpton delivered a direct response to commissioner Roger Goodell’s mea culpa on Friday that the NFL was “wrong” to discourage players who peacefully protested police brutality and social injustice against black people.

Goodell’s statement arrived after a second week of daily protests nationwide and around the world in response to Floyd’s killing while in custody of the Minneapolis police. It also failed to mention Kaepernick, who lost his job as an NFL quarterback after leading the protest movement among players.

‘Don’t come with some empty apology’

Sharpton didn’t call for Goodell to mention Kaepernick. He called for the NFL to give him his job back following a three-year absence from the league.

“It’s nice to see some people change their minds,” Sharpton said. “The head of the NFL said, ‘Yeah, maybe we was wrong. Football players — maybe they did have the right to peacefully protest.’ Well don’t apologize, give Colin Kaepernick a job back.”

The line drew a standing ovation from some in attendance at Houston Memorial Gardens.

“Don’t come with some empty apology, take a man’s livelihood,” Sharpton continued. “Strip a man down of his talents and four years later when the whole world is marching, all of the sudden you go and do a FaceTime talking about you sorry. Minimizing the value of our lives.

“You sorry, then repay the damage you did to the career you stood down. Because when Colin took a knee, he took it for the families in this building. And we don’t want an apology. We want him repaired.”

Sharpton made his statement shorty after introducing the families of Trayvon Martin, Eric Garner, Botham Jean, Pamela Turner, Michael Brown and Ahmaud Arbery, all of whom were black people killed in acts of violence, most of them at the hands of police.

“Equal justice,” Sharpton continued. “Equal fairness. We’re not anti-anybody. We are trying to stop people from being anti-us.”' 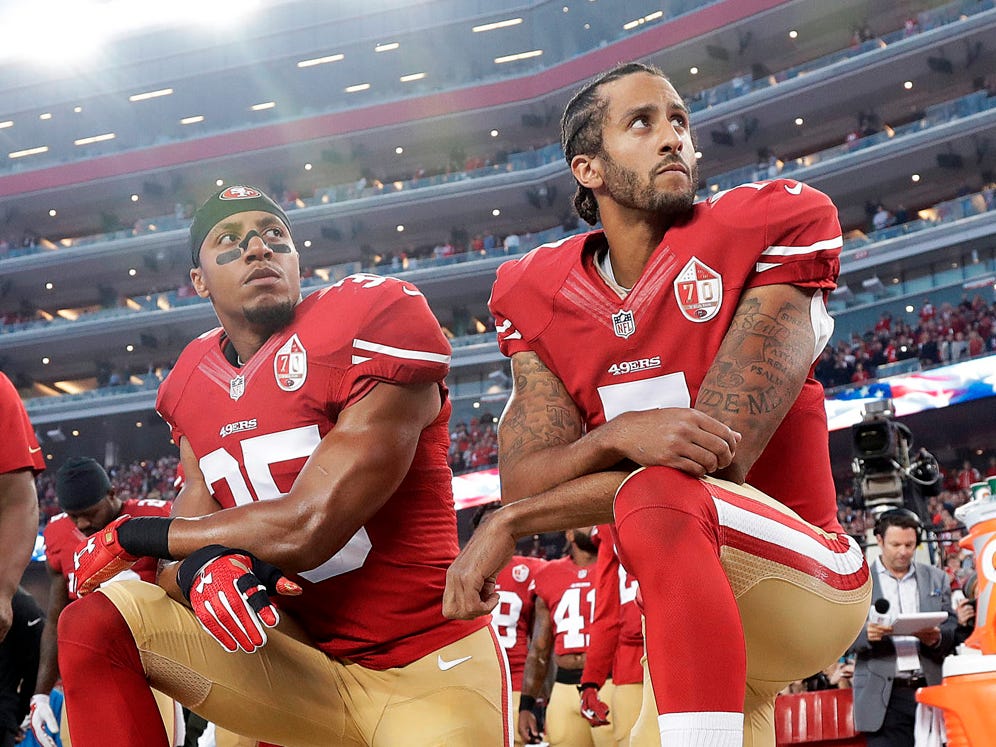 Kaepernick last played in 2016 for the San Francisco 49ers. The four-year starter opted for free agency that offseason at 29 years old after six seasons in San Francisco that included a Super Bowl appearance.

During his final season with the 49ers, Kaepernick completed 59.2 percent of his passes for 2,241 yards with 16 touchdowns and four interceptions in 12 appearances. He also rushed for 468 yards and two touchdowns on 6.8 yards per carry.

Just last month, former NFL executive Joe Lockhart admitted that teams declined to sign Kaepernick because he was deemed “controversial,” not because of his football ability.

Meanwhile Kaepernick, 32, has repeated his desire to return to the NFL while touting his fitness and game readiness.

Goodell drew applause for his statement on player protests last week. But many, like Sharpton, are calling for action instead of words from the NFL. And that action looks like Kaepernick signing an NFL contract.