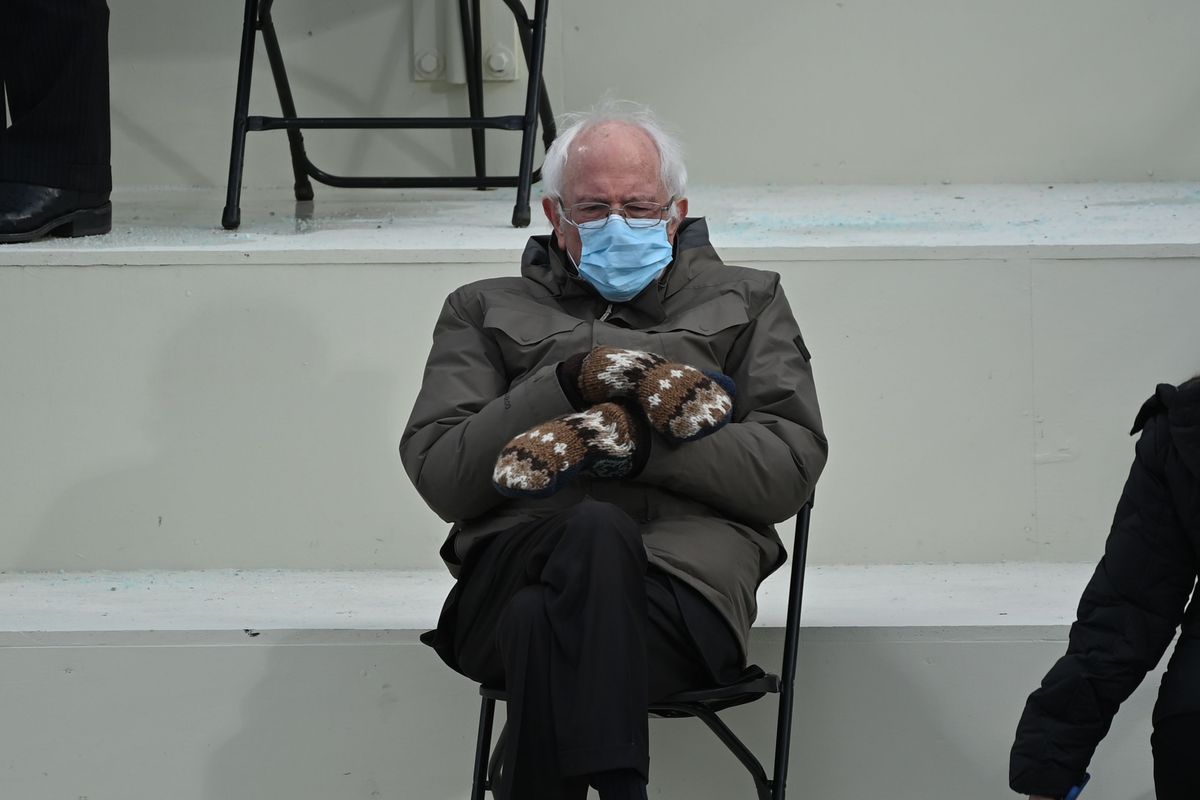 When Bernie Sanders bundled up in extremely Vermont-esque winter gear for Wednesday’s inauguration ceremony, the internet erupted with viral pictures of the senator’s now-iconic outfit and social media users created thousands of memes placing him anywhere from classic movie scenes to historical photographs.

Yet the focal point of each recurring image quickly became clear — Sanders’ mittens — and many began asking where they could get their hands on — or in — a pair.

I had some spare time today and wanted to create these #BernieSanders #berniesmittens nails ✨ pic.twitter.com/yZI0EpAU5F

Bernie Sanders, first of his name, Wearer of Mittens, Sitter of Chairs pic.twitter.com/1j6p8mrdlr

And here’s the Star Trek version of the Bernie’s Mittens meme. 😂❤️🖖🧤 pic.twitter.com/HkEn9iVdVf

I don't care if you're tired of seeing #Berniememes. This is awesome! pic.twitter.com/kDgKZzN5wP

Jen Ellis, the Vermont schoolteacher who handcrafted the mittens with repurposed wool sweaters and fleece made from recycled plastic bottles, initially tweeted that she was thankful for the abundance of interest but had no more for sale.

In a Thursday night appearance on “Late Night With Seth Meyers,” Sanders said “she has been somewhat overwhelmed by the kind of attention that is being shown to her mittens.”

But three days later, Ellis had made three extra pairs and set up three separate auctions to sell them.

“I have heard your requests, and I am happy to tell you that I am making just a few more mittens today and tonight to be auctioned off for good causes,” Ellis tweeted on Saturday.

I have heard your requests, and I am happy to tell you that I am making just a few more mittens today and tonight to be auctioned off for good causes. Tune in to MSNBC tomorrow morning at 7:45a.m. EST to find out where you can bid for a pair! pic.twitter.com/O6Vr7llDLz

She told MSNBC Sunday morning that she had been teaching a half day at her school when she first realized Sanders was wearing the mittens she made him at the presidential ceremony.

“About 100 people tipped me off,” she said. “I was actually at school when it started. I was teaching remotely from my classroom.”

We are SMITTEN by these MITTENS! @vtawesomeness the woman behind the viral Bernie Sanders mittens meme sensation joined @kendisgibson and @LindseyReiser on #MSNBC pic.twitter.com/9AUch4ecem

She told the station that it wasn’t until she began heading home that she noticed the flood of messages about the senator’s mittens, and how they had become a sensation.

“Now that my report cards are done. I sat down this morning and made 3 more pairs of mittens,” Ellis wrote in her eBay listing, “All to be auctioned off for fundraisers. I am so flattered that people want my mittens and wish I could make them for everyone.”

Here’s a snapshot of each pair, and where you can bid on them:

Ellis donated a striped blue pair of mittens to Passion 4 Paws, a foster-based dog rescue organization in Vermont. Currently listed on eBay for over $800, the gloves have since amassed 58 bids.

A rainbow-colored pair is also available on eBay, currently selling for over $2,000 with 70 bids. Ellis said the money for these mittens will go toward her daughter’s college fund.

With 12 bids, the final pair of black and periwinkle patterned mittens are running for $900 on Charity Auctions Today.

“Kiss off every last lingering thing from 2020, Bernie-style,” Outright Vermont wrote in its auction description. “These crossed mitts speak for all of us when we say: ‘We’re here to stay cozy, and we aren’t going anywhere. We are berning to ensure that systems of power work for all of us — starting with LGBTQ+ youth!’”

Each auction is slated to end by Jan. 29.

“You can be a part of social media history,” the organization wrote. “ Bid on these mitties and make them yours.”