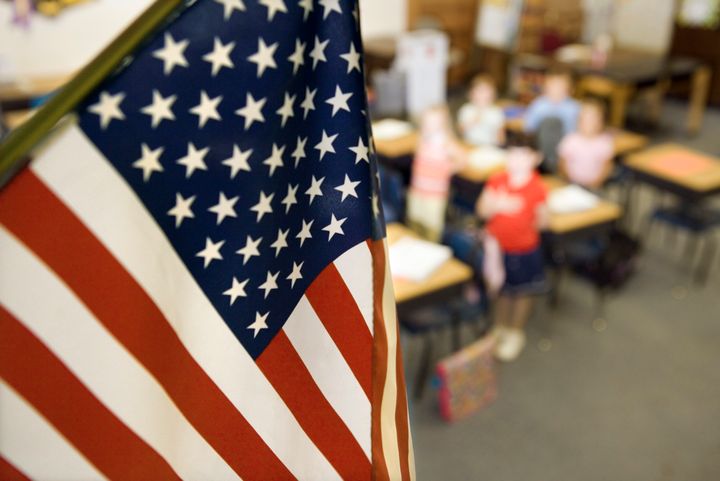 An 11-year-old boy was arrested following a confrontation at school over his refusal to stand for the Pledge of Allegiance, which he reportedly called racist against black people.

The Florida boy was charged with disrupting a school function and resisting arrest without violence on Feb. 4 after allegedly threatening his substitute teacher at Lawton Chiles Middle Academy in Lakeland following an argument, Patch reported.

Kennedy added that students are not required to stand for the pledge, which he said the teacher apparently did not know. She will no longer be employed at any of Polk County’s schools, he said.

A Lakeland police spokesman confirmed the charges against the boy, but declined to provide HuffPost a copy of the arrest report because of his age.

Lakeland police said in a press release that the boy was reportedly asked more than 20 times to leave the classroom. When he finally was escorted to the office, he made threats, police said.

The confrontation started when the sixth-grader called the American flag racist and the national anthem offensive to black people, according to local station Bay News 9, which obtained a copy of the police report.

The teacher asked him: “Why if it was so bad here he did not go to another place to live.”

He replied: “They brought me here.”

She then suggested that he “can always go back.”

The teacher reportedly said she called the school’s office because she “did not want to continue dealing with him.” A school resource officer placed the child under arrest after he refused to follow multiple commands.

He was taken to a juvenile detention center and suspended for three days, Bay News 9 reported.

"If she felt like there was an issue with my son not standing for the flag, she should’ve resolved that in a way different manner than she did."

The boy’s mother, Dhakira Talbot, has spoken out against the teacher’s behavior and has insisted that the charges against her son be dropped.

“She was wrong. She was way out of place,” Talbot told Bay News 9. “If she felt like there was an issue with my son not standing for the flag, she should’ve resolved that in a way different manner than she did.”

Similar demonstrations of refusing to stand during the national anthem have become increasingly common since then-San Francisco 49ers quarterback Colin Kaepernick began taking a knee during the anthem in 2016 to protest police brutality and racial injustice.

Kaepernick reached a settlement with the National Football League on Friday after accusing team owners of colluding to keep him from playing because of his silent protest.

This article has been updated to include additional information from police.